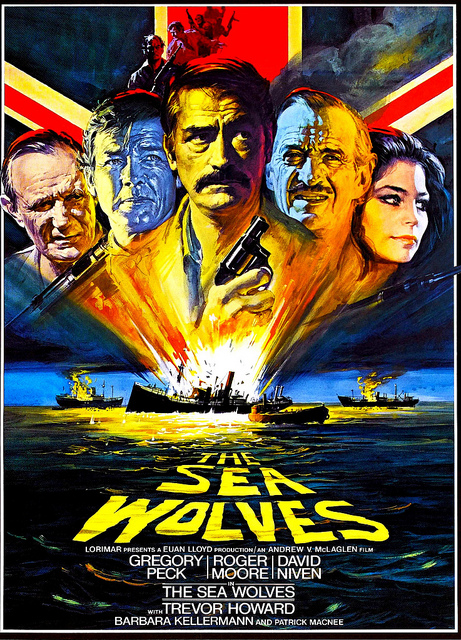 The Sea Wolves (1980) Movie, In March 1943, in World War II, the Germans use the neutral harbor of the Portuguese colony of Mormugoa to transmit information to a U-Boat about the allied ships to sink them in international waters. In Calcutta, the British Intelligence assigns Colonel Lewis Pugh (Gregory Peck) and Captain Gavin Stewart (Sir Roger Moore) to spy in Goa and they discover that there are three German vessels anchored in the area and the famous spy Trompeta (Wolf Kahler) is based in Goa. They kidnap Trompeta to interrogate him, but Lewis accidentally kills the spy after fighting with him in the runaway car. Meanwhile, Gavin has a one night stand with the gorgeous and elegant Mrs. Cromwell (Barbara Kellerman), who is the partner of Trompeta. They fail in their mission, but Lewis and Gavin convince their chief to use the veterans from Calcutta Light Horse led by the retired Colonel W.H. Grice (David Niven) to travel to Goa on board of the old ship Phoebe, pretending to be drunken businessmen on vacation. They prepare to destroy the Ehrenfels and the two other Nazi radio ships and get the German secret codes under the command of Lewis. Meanwhile, Gavin on shore has a love affair with Mrs. Cromwell and prepares the diversion to facilitate the mission of Lewis and his men. Written by Claudio Carvalho, Rio de Janeiro, Brazil